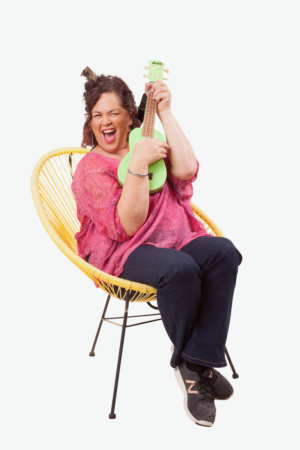 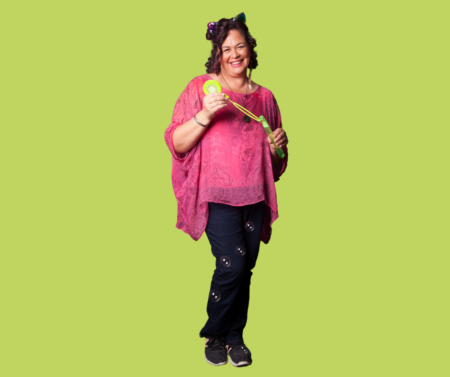 Even though she recalls writing her first song at age 7,  and singing it to the class at school – Jaqi’s professional music career didn’t really begin until age 18 at the Arts Centre in Christchurch fronting a covers band formed by University students.

She ended up playing keyboard, vocals and guitar professionally in Christchurch’s top hotel bands and duos. Over the years Jaqi gradually stockpiled an extensive range of catchy and punchy original songs, comedy songs, songs written in te reo Māori and eventually bilingual songs for children. With a new collection of freshly baked bilingual waiata for tamariki and a 5 track rock fusion EP on the way, this feels like a rocket launch blast-off kind of a year for this agile and resilient performer.

“After a death-defying move from Southland to Auckland for breast cancer surgery in 2015,  I felt it was time to reach for the stars and realise a few long-held dreams. I searched and found producer, Ian Rushton and soon created my first bilingual children’s album Waiata Tamariki .  I followed this up with a pivot towards my main catalog of adult rock fusion songs and the eclectic sixteen-track rock album Statues Of Liberty was made and released in October 2019. Recorded at Kog Recording Studio in Titirangi with the guitar, bass and track production expertise of Tim Skedden (The Feelers, Babysitters Circus), the mastering skills of Chris Chetland, and the drum skills of Corey Friedlander (City Of Souls), we invited guest bass players; Clint Harris (The Feelers, Op Shop) and Marika Hodges (Troy Kingi, Hollie Smith) to add their personal touch on Bully, Waiho Mai and Simmer.“

Tracks from the adult album have been playlisted on student and community radio around the country (eg Top 100 Dunedin Radio One) and on both national and international rock blogs, magazines and playlists (eg Rock Era Magazine, The Big Idea).

In 2020 Jaqi started work with Matthew Donaldson, digital storyteller on four  NZ On Air funded videos to match new waiata earmarked for her second bilingual album, Waiata Tamariki 2. Her songs from both children’s albums are now getting radio airplay in NZ, Australia and USA (eg Suzy & Friends, Funky Kids Radio and Kindie Rock Stars) and are streaming steadily.  A live album release event and children’s art exhibition is being planned for Hamilton on October 1st.

Jaqi performed live at Urban Flava, a Music For Parks event in South Auckland just before the first lockdown in 2020, then at the Hamilton Garden Arts Festival and the Tūrangawaewae Waka Ama regatta in 2021.  For Matariki, the new duo Jaqi & Jade are opening the Hamilton Lake Domain Matariki family event on Friday June 24 as well as the Puketāpapa Manu Aute Kite Day event in Mt Roskill on Sunday June 26.

Working with ONZA (Orff NZ) and mentored by Auckland University lecturer, Robyn Trinick, Jaqi co-created a teacher workshop to help teachers explore sounds and movement ideas with their tamariki to retell Māori legends.  The new children’s album Waiata Tamariki 2 will feature a track called Te Ika a Māui which was inspired by the mahi of the tamariki Jaqi was teaching.

“I do this as a language learner as much as a teacher.  I was not brought up in a Māori-speaking home and I’m far from a te reo expert.  I create these songs to help myself and others learn te reo.  With short, repeated simple phrases and words and the English translation already within the song, I can help listeners (children, teachers, parents) to say/sing and understand the Māori words.  Research shows that using the medium of song to help people learn te reo actually works.”

Jaqi is currently designing more workshops for teachers based on the interactive music, movement and te reo Māori mahi that she is currently delivering with wing-person co-star Jade Pataera-Nikora.  She was invited to be a guest expert as part of Judi Cranston’s Rock Your Music Program online teacher education course.

Reaching right back into the CV archives, Jaqi was at one time a student of performing arts at Hagley Theatre Co in 1995 and was often hired as a singing jester on party buses. This led to the development of stand-up comedy routines and forming a comedian’s collective (which included Rhys Darby). She performed at such iconic historical bars as Kitty O’Brien’s and The Temple in Auckland, Bath St Bar in Dunedin and the Wunderbar and Dux Lux in Christchurch. This year in 2022, Jaqi was asked to perform a dancing and acting role as part of Ema I’u’s upcoming music video for her debut release Midnight Mistress.

A career highlight was the tour in Germany in 1998  in a female duo,  The Mona Lisas with a collection of original acoustic indie rock recordings. Her grungy rock band Mothership was played regularly on Cry music TV, and later her multi-cultural line-up Manu Taniwha was aired on TV2’s Ground Zero music show in 1999.

In 2005 when Jaqi’s twin baby girls were 3, her electronica/country song Buying Heaven was included on an NZ Music Month CD sent out free with The Christchurch Press and was played on local radio.  Five years later, Jaqi celebrated the production of a compilation of her recordings over two decades, Crowning Jewels with a live show at Fat Eddie’s.  Her final performance as a Christchurch resident was the City Council-run Lunchtime in The Square, Christchurch 2011.

” It’s been a geographical journey as much as anything else.  I have songs written in Christchurch, Invercargill, Auckland and my home town is Whakatāne. Since discovering my Māori heritage I also now link to Waikato, Tauranga and the East Coast. My identity – who I am and where I come from is integral to all my creative works.  It’s a really good feeling to have created two high-quality albums reaching across demographics. To have a new children’s collection and a new rock EP coming out within the next 12 months is really satisfying.”